Sharee and Annette Page, from northern Utah, are as close as two sisters can be. They have both worked for the same company for over 10 years. These two sisters have very similar lives. Both love to travel, and have together visited over 50 countries. Lately though, their travels have taken them from their mother’s house, to chemotherapy treatments in Davis Hospital in northern Utah. They sit side by side and talk to each other as they both battle breast cancer. Sisters with breast cancer: this is where they are now.

The two sisters were diagnosed with breast cancer less than four months ago, and only two weeks apart. Annette, 36, was diagnosed March 21, and Sharee, 34, was diagnosed on April 5.

“Annette had a major lump. It was huge, the size of brick, in her left chest. We had been telling her for couple months to go to the doctor. That’s not normal,” said Sharee.

Finally Annette went to her physician, and they immediately began testing. They told her she had stage three breast cancer that had spread to her lymph nodes. Her treatment would begin with chemotherapy, and then she would need to have a double mastectomy and radiation.

“It was kind of a blessing,” said Sharee.

It seemed at around the same time Sharee felt a lump in her left breast. A couple weeks after Annette’s diagnosis she knew she needed to get herself checked as well. She even went to see the same physician that was treating Annette. He was surprised to have two sisters with lumps at the same time. Sharee was diagnosed with stage 2 breast cancer. 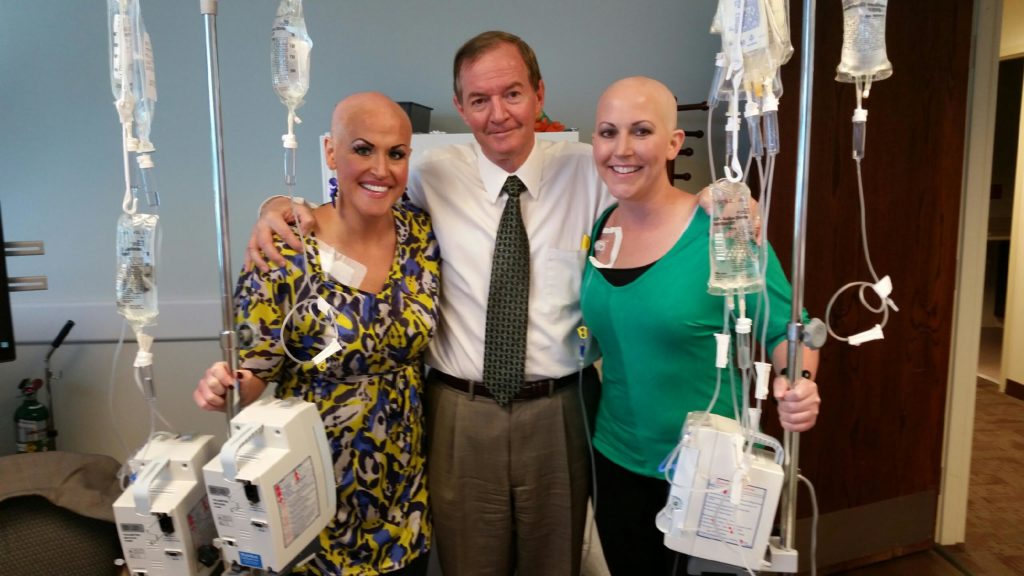 Sharee (left) and Annette (right) at a chemotherapy appointment.

“It just seemed unreal, having her go through the same thing, at the exact same time,” Annette said. “I knew there had to be a reason we were going through this at the same time. We’re going to learn and grow together during this process.”

Genetic testing began among the six siblings. A younger sister is the only one who is negative. One brother decided to wait to have genetic testing. The test showed all of the other siblings were BRCA2 positive. BRCA2 is a gene mutation that can increase the risk of breast cancer (see this video clip for more info on it).

It has helped to have someone to lean on, according to the sisters.

“It’s been a blessing go through this at the same time,” Annette said. “We can moan and complain to each other if we want. In some ways it makes it easier for my parents, because we have each other’s support. So they don’t feel one of us is alone.”

“We both have a very similar reaction to the chemo,” Sharee said.

Both lost their appetite, and were unable to eat for nearly two weeks, both had identical rashes that appeared on their bodies 10 days after treatment.

Coincidentally, their sister in law is battling a different type of cancer. She went through chemotherapy last year, and has also been a great support to the two sisters.

“She knows exactly what we are going through as well,” Sharee said. “My sister had her last chemo. Mine is August 4.”

“There are things we’ve experienced that have brought us closer. To really know what someone else is going through brings you closer together in any sense, particularly in this situation,” Annette said.

“We’ve gone through this whole process together,” Sharee said. We come from a strong background of faith, and we are pretty positive in general. I think it helps knowing everyone has trials. In a time like this, with a cancer diagnosis, the first question is always ‘Why me?,’ but the first question I asked is ‘Why not me?’ You can’t feel sorry for yourself when you’ve watched a loved one go through the same thing.”

We are grateful to Annette and Sharee for taking the time for this interview. Please keep them in your thoughts and prayers during these coming months. If you want to add some encouraging comments, we will pass them on to these amazing sisters.