This week, as part of our September focus on going flat, we welcome Rebecca Pine. A talented writer and advocate for women with breast cancer, Rebecca shares her experience as a young mother who faced mastectomy. She also touches on the inspiration for The Breast and the Sea (follow the link or see the end of this article for details on this project).

It Took Me by Surprise

At least initially, breast cancer seemed to be happening to me. I was 33. I ate organic food, exercised regularly, and meditated. I had breastfed my son. It was a surprise that these things had not been enough to ward off all disease, even with a strong family history.

The standard of care seemed to be a mastectomy with reconstruction. After discovering that I also carry the BRCA1 gene, my doctors advised a double mastectomy. Almost everyone I spoke with had an opinion about my treatment and surgical options, and the overall consensus was, “of course you will reconstruct.” None of the surgical subtypes sat well with me, and I knew this was something that could not be infinitely postponed. Although I wasn’t ready to remove my unaffected breast, I ultimately went along with the commonly suggested plan of a tissue expander followed by a saline implant.

Although in reality, 58.4 % of women with breast cancer do not have reconstruction (Morrow et al., 2014), movies, commercials, and magazine advertisements continually remind us that we live in a society where virtually every female—whether two-breasted, one-breasted, no-breasted, or reconstructed—presents the appearance of the traditional feminine curves. It’s no surprise that I found it difficult to imagine what my body would look like without the shapely softness of my chest.

Newly married, my husband was incredibly supportive as I weighed the pros and cons of my options. While uncertain about my surgical choices, we both hoped to have another child. In an effort to envision how my body my body might look with each of the possible post-cancer outcomes, I sketched simple images of myself as a rounded stick figure. I did not know if I would be able to have a child after breast cancer, but held tightly to that hope.

Drawings soon flooded my journal. Whether I depicted myself with two reconstructed breasts, a natural breast coupled with an implant, a solitary breast with one side flat, or entirely breastless, each sketch portrayed me with a belly round and full—the most prominent and important feature. In 2009, the Internet was not what it is today. Despite regular searches, I could not find many photographic examples of what post-breast cancer bodies looked like. 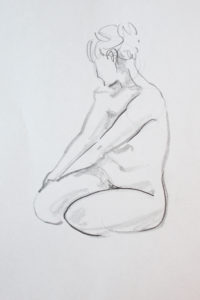 Going flat was not something I seriously considered at that time. Not because I didn’t know that it was an option. My mother, in fact, had chosen not to reconstruct when she went through breast cancer nine years before me. I had not heard of women in their 30s going flat before, however, and I had certainly not seen photographs. Despite my simple drawings, I had difficulty imagining myself in that way.

As someone who considers herself to be a “natural person,” striving to keep unpronounceable ingredients out of food, hair, and skin care products, having something foreign inside of my body made me uncomfortable. Although my surgeons did a great job, I immediately regretted having an implant. It was an artfully formed mound that resembled its pair well under clothing. Naked, however, it looked strange to me. Not at all, in my opinion, like its predecessor. It didn’t feel like breast tissue to the touch, and regardless of whether it was caressed gently or bumped, the sensation was uncomfortable. At times I would stare at my reflection in the bathroom mirror and allow myself to mourn my loss, but I often averted my gaze. I was alive and getting stronger. There was so much to be thankful for. I focused on these things as much as possible, but remained displeased with my appearance and choice.

Time went by and I tried to make peace with the changes in my body. One day, I discovered that I was pregnant! The life stirring within my growing belly became 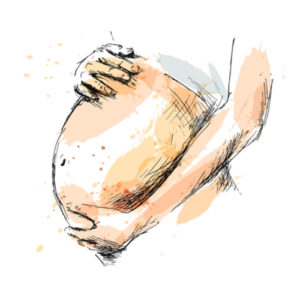 the center of my attention, and I seldom focused on any dissatisfaction with my reconstruction. After the birth of our daughter, I was able to breastfeed with my remaining breast. My medical team advised me to have a prophylactic mastectomy as soon as I weaned. As this time drew near, I began researching surgical options once more.

Knowing I would not be satisfied with another implant, I looked into other possibilities. There had been some new surgical advances since my first mastectomy. Breast mounds could be made from grafted fat and muscle tissue from other areas of the body; not only abdomen, but now upper back, inner thigh, or buttocks could also be made into reconstructed breasts. The result would be softer, made from my own body tissue, but the operations were generally 12 hours or more, with a much longer recovery time. As an active, young mother, I cringed at the thought of going through such a major recovery period. My husband suggested not reconstructing, however this was not something I could imagine at first.

Worth a Thousand Words 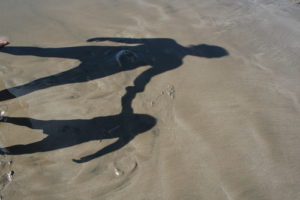 One night I came across a single image on the Internet, and it literally changed my life. It was a picture of a young woman on a beach with her children. She was topless and breastless, carefree and smiling. When I saw this image, I immediately felt a sense of freedom. I weighed out the pros and cons of each option. When I considered reconstruction, I tightened up inside. The idea of going flat brought a sensation of ease. Recognizing this gave me the courage to charter my own course. Breast cancer was no longer happening to me. This time I was making the choices that felt right in my core. While I felt sorrowful about losing my other breast, I felt blessed to be able to remove it preventatively, drastically reducing my lifetime risk of recurrence or secondary breast cancer.

Regardless of surgical outcome, losing body parts that society deems the most feminine takes adjusting to. Going flat was the best surgical decision for me, as well as for our family. I was able to bounce back from the operation and resume my active lifestyle relatively quickly. If I had opted for microsurgery, it would have been considerably longer before I would have been able to pick up my young daughter, go running, or swim. I have since met many whose reconstruction failed due to infection or tissue rejection, requiring multiple operations and at times the necessity of removal.

Whole, In Spite of Physical Loss

Being flat feels like an authentic representation of who I am now. My external landscape has changed; in many ways I have changed inside as well. My scars tell a story of strength, marking the journey of evolution from who I once was to the woman that I am now. I have learned to listen more closely to the quiet sensation of ease I felt when I first considered not reconstructing, and it serves me in every aspect of my life. Today, I feel more whole and more comfortable in my own skin than I ever have. I do not wear prosthetics.

I am glad that there are many surgical possibilities available to all diagnosed with breast cancer, and that each person is able to make the choices that feel best suited to them. Educating those newly diagnosed about the option of going flat has been important to me. It is now becoming a more widely acknowledged outcome. I have chosen to be photographed topless, as a way to help other breast cancer patients and survivors with their own process of decision-making and self-acceptance. May we all be guided by our inner compass, fiercely loving and accepting our decisions and ourselves exactly as we are. 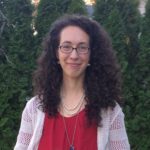 Rebecca Pine was diagnosed with breast cancer in 2009. She is a writer and workshop facilitator for The Breast and the Sea, a written and photographic project that empowers those faced with breast cancer in the process of emotional healing through personal interviews, photographic witnessing, community support, and reflective, nature-based movement workshops. Rebecca offers additional guidance to those who wish to delve deeper into the process of inner healing through individual consultations and programs addressing self-acceptance, loss, body image, and reclaiming a sense of wholeness. She also blogs about breast cancer, family life, and the healing process.